Why Is My Dog Eating Everything? 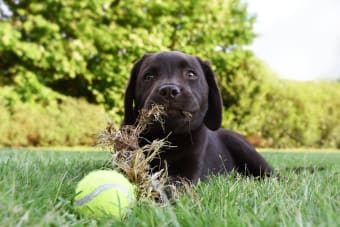 Some dogs will eat anything they see in front of them, whether it's grass, poop, or roadkill. If your dog eats things that they aren't supposed to, you might have a reason to be worried. In this blog, our Delaware County vets discuss some of the reasons why your dog may be eating everything and how you can stop this concerning behavior.

Why Dogs Eat Everything Off the Ground

If your dog will eat everything and anything, we want you to know that you aren't alone. While this behavior might make your stomach turn, this is a natural scavenging behavior for dogs. Puppies may be especially keen on eating items they spot such as garbage, stones, leaves, and dead animals.

What Some Dogs Will Eat & Why

The term for eating non-edible items for both dogs and people is Pica. Dogs that have pica practically have a compulsive urge to eat non-digestible items like sticks, dirt, and rocks. It's believed that animals that have pica might be missing important minerals or other nutrients from their diet. If you suspect your pooch's habit of munching on nonedible items might be caused by pica contact your vet.

Here are a few of the most common things dogs like to eat:

Dogs will often nibble on grass, although some dogs enjoy grass-eating more than others. Provided that your pooch is otherwise healthy, eating grass is generally considered to be safe provided that the grass is not heavily coated in chemicals.

It is believed that dogs eat grass for a variety of reasons including introducing more fiber into their gastrointestinal tract, relieving boredom, and simply because they enjoy it. If your pup is eating an alarming amount of grass speak to your vet about ways to curb this canine behavior.

It's common for puppies to eat dirt. The reason why dogs eat dirt isn't known, however, it's often believed that it's the result of the varying smells of different areas like the forest floor, fields, or even your pile of mulch. Your dog may be eating dirt to get a better understanding of the world they are in. If your puppy takes an occasional bite of dirt you most likely don't have a reason to be worried.

However, there could be a problem if your dog eats large amounts of dirt because too much of it could clog your dog's digestive tract. If your canine friend enjoys eating dirt, reach out to your vet to find out what could be causing this behavior and how you can put a stop to it.

Many dogs love to play with and eat rocks, which can be a real health concern. Chewing rocks can damage your dog's teeth and gums, and choking is a very serious hazard. If your dog is a teething puppy, try supplying your pooch with lots of fun chew toys.

If your adult dog has an obsession with eating rocks, we suggest bringing them to the vet. They may be eating rocks as a symptom of anxiety, boredom, or to seek attention. Your vet should be able to diagnose the source of this behavior and suggest ways you may be able to prevent your dog from eating rocks.

Pet parents often come to us at their wit's end with their dog's disgusting poop eating habit. Why does my dog keep eating poop?! In fact, poop eating is so common it's actually been given the name 'coprophagia' (kop-ruh-fey-jee-uh) and this could be the result of a combination of psychological, genetic, and behavioral factors.

Eating their own poop is generally considered harmless for dogs, however eating the poop of other dogs or animals is a cause for concern since parasites, viruses, and toxins can be transmitted through feces.

One theory suggests that poop eating could be part of your dog's innate scavenging tendencies, developed as a survival tool for times when food is scarce. After all, when there is no food to be found a dog just can't afford to be too picky.

Here are some physical reasons why your dog may be eating poop:

Other reasons why your dog could be eating poop:

It doesn't matter what your dog likes to eat, there are several things you can do to stop this behavior:

Your vet will be able to conduct a nose-to-tail physical assessment of your dog to look for signs of illness, discuss the causes of your dog's strange eating habits, then provide you with valuable advice on your pet's nutritional and caloric requirements based on your dog's size and breed.

Note: The advice provided in this post is intended for informational purposes and does not constitute medical advice regarding pets. For an accurate diagnosis of your pet's condition, please make an appointment with your vet.

Contact our Delaware County vets today if you are worried about your dog's eating habits.

Stoney Creek Veterinary Hospital is accepting new patients! Our experienced vets are passionate about the health of Delaware County companion animals. Get in touch today to book your pet's first appointment.